The Many Thyroid Hormones

There are a number of different hormones that work together to control the body's energy production. They are usually referred to by their initials: TRH, TSH, T4, T3, and rT3: 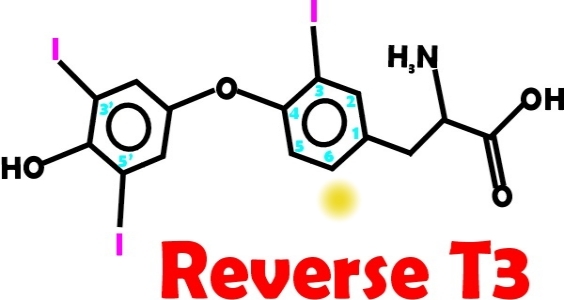 Note that T3 and rT3 have exactly the same chemical formula except for the exact position where the iodine atoms (magenta in the above diagrams) are placed on the thyronine molecule. This small difference totally changes their effect on the body:

Thyroid function can be understood like the children's story of Goldilocks and the three bears: In order to try to keep the body's energy production in the "Goldilocks zone" of "just right", the body uses a complex regulatory mechanism that is well known to engineers as well, called a "negative feedback loop."

It is easiest to understand the concept of a negative feedback loop by considering the engineering implementation of a simple household heating and cooling system, whose job it is to maintain the temperature inside at a constant temperature that is called the set point. For a house, a set point of about 73°F is typically chosen. The set point is chosen by the homeowner, and is entered into a device on the wall called a thermostat.

In its simplest form, a negative feedback controller loop consists of three components: 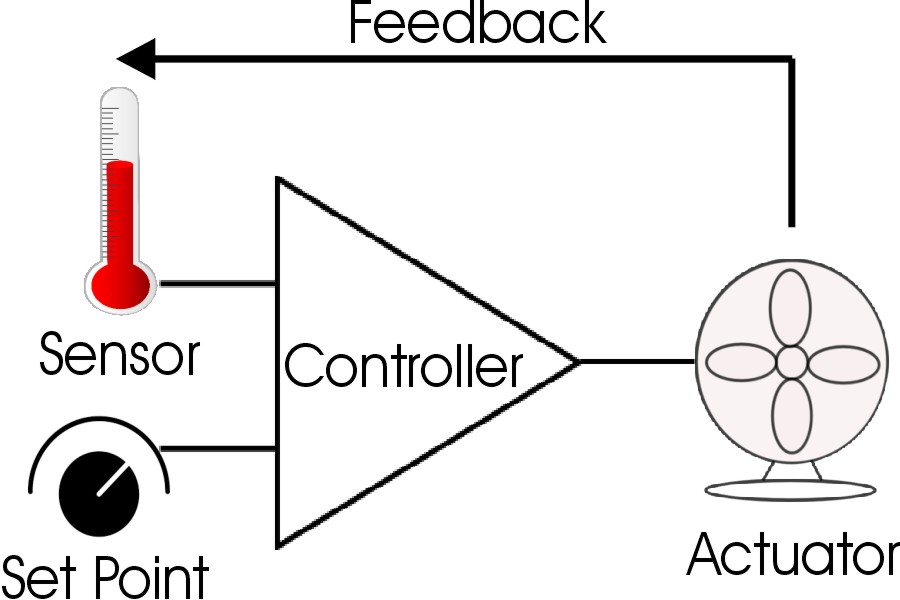 A more sophisticated system might also sense the time of day, and the controller would take into account variable costs for electricity depending on the time of day.

The most sophisticated system would also be sensitive to the presence or absence of the homeowner (and the homeowner's schedule), and be less aggressive (more energy efficient) when the homeowner is absent (or expected to be absent).

Simplified View of the Thyroid System

By analogy, a simplified view of the thyroid system works the same way, but with greater complexity in the details. There are a number of sensors in the brain that measure the body's energy reserves, needs, and T3 levels. The hypothalamus and pituitary glands act as both the sensor and controller, which calculates an appropriate set point for energy expenditure, compares that to the current status measured by the sensors, and sends a control signal to the actuator. The control signal is the hormone TSH, and the actuator is the thyroid gland, which produces T4, which is converted into T3 by various tissues throughout the body, and which tells the mitochondria in all cells of the body how much energy to make. Not only does T3 stimulate mitochondria, but it also "feeds back" to sensors in the hypothalamus and pituitary gland to help control how much TSH is released. 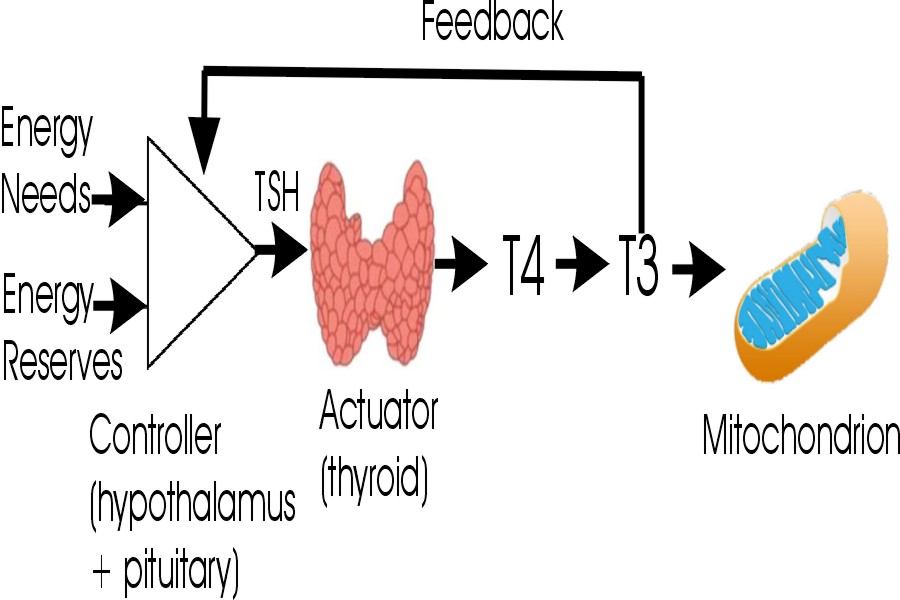 There are many different sensors involved in the thyroid control system, and the controller logic is complex. A full discussion of all the parameters that are sensed and integrated by the controller is beyond the scope of this discussion.

These concepts are enough to make your head swim. But don't feel bad. The idea is both simple in overview AND complex in detail. As Karl Johan Åström and Richard M. Murray pointed out in their book Feedback Systems: An Introduction for Scientists and Engineers:

Simple causal reasoning about a feedback system is difficult because the first system [Sensor] influences the second [Actuator] and second system influences the first, leading to a circular argument. This makes reasoning based upon cause and effect tricky, and it is necessary to analyze the system as a whole.

In the simplified thyroid system model described above, the two hormones TSH and T3 stand out as being particularly important in troubleshooting the system (diagnosing what is wrong when a patient presents with symptoms of either hyperthyroidism or hypothyroidism). TSH represents the control signal derived by the hypothalamus and pituitary from all the sensor data, and T3 represents the actuator response produced by the thyroid gland.

In our simplified view, the following diagnostic reasoning can be applied:

However, if only TSH is ordered, then the above decision table reduces to the following:

From the above, it can be seen that both TSH and T3 need to be measured to properly diagnose and treat, and that in some cases additional tests for autoimmune disease, thyroid, hypothalamus or pituitary failure/tumors are also necessary.

Intermediate View of the Thyroid System

If the above is not enough to overload your brain, there another feature of the thyroid system that can be important in some cases.

The TRH stimulation test can be used to evaluate the pituitary gland's ability to respond to TRH produced by the hypothalamus. 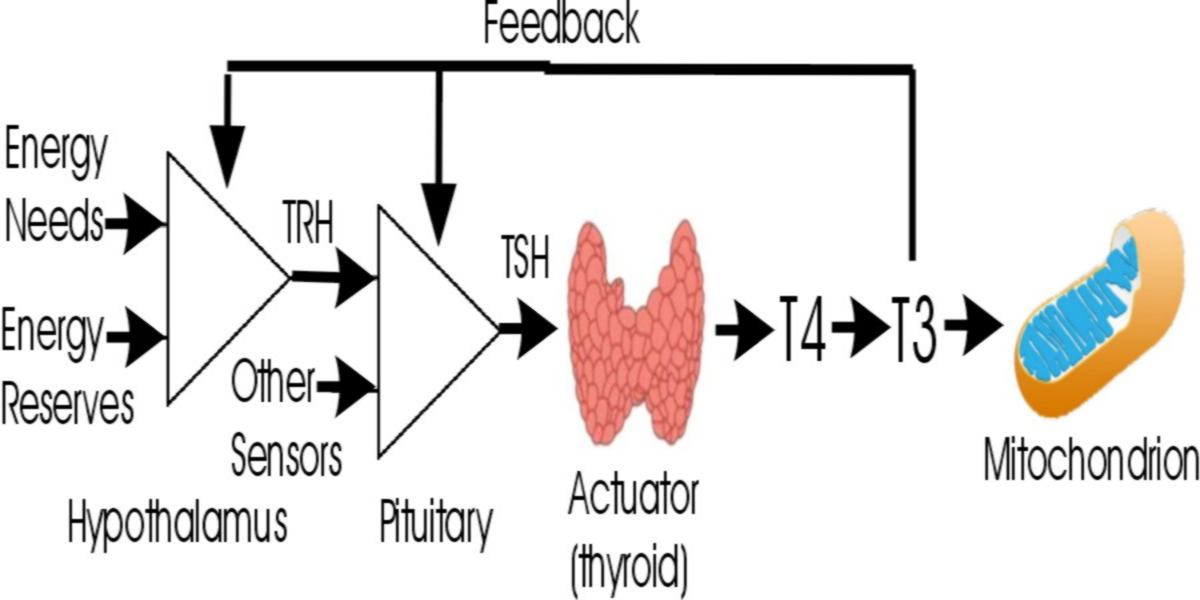 Complex View of the Thyroid System

Just when you think you understand how the thyroid system works, there is another wrinkle. The T3 hormone is carried by the blood to all cells in the body. The thyroid hormones T4 and T3 are not soluble in water, so they must be carried attached to proteins in the blood called albumin and thyroid binding globulin (TBG). When T3 and T4 are tightly bound to these carrier proteins, they are not "free" to do their job.

These factors can be evaluated indirectly by comparing measurements of both the total T3 (tT3) and free T3 (fT3) (and the corresponding total and free T4).

Advanced View of the Thyroid System

There is one additional major consideration. Previous discussion focused on the role of T3 in stimulating mitochondrial activity, and mentioned only in passing that the thyroid gland produces (mostly) T4, which is converted to T3 in various tissues throughout the body. It is not that simple. The conversion from T4 to T3 is also a part of the feedback control of the thyroid system. The tissues that convert T4 to T3 form yet another sensor/controller component, and based on various environmental conditions in the body may produce some mixture of T3 and reverse T3 (rT3). The possibilities include:

Another new piece of information is that BOTH regular and reverse T3 exert a negative feedback effect on the hypothalamus or pituitary sensors/controllers, so that high levels of either fT3 or rT3 reduce TSH production. This point leads to the observation that low TSH combined with low T3 may be due to excessive production of reverse T3. Reverse T3 (rT3) may also exert a negative feedback effect on the conversion of T4 to T3.

There are three deiodinase enzyme types (D1, D2, and D3) found in the pituitary and peripheral tissues. D2 converts T4 to T3, whereas D3 converts T4 to rT3. (D2 also converts rT3 to T2, while D3 converts T3 to T2) [Bianco2006]. The role of D1 and T2 is unclear but it has been proposed that T2 may have a role in treating edema and moderating the effects of T3.

The adrenal cortex produces a number of steroid hormones, including cortisol, which has been dubbed the "stress hormone." The thyroid control system senses cortisol and stress levels, and makes adjustments to TSH production and T4 conversion to T3/rT3 accordingly. Dr. Weyrich uses the analogy of an automobile to explain this concept:

Imagine that your car has 4 bald tires that could "blow out" at any moment. If you have to drive such a car, then how will that affect your driving? Most people would agree that they would use the gas pedal lightly so as to not go to fast, because the tires cannot handle too much speed. The same happens in your body. If your adrenal gland is fatigued, then it cannot make much cortisol to handle stress. The thyroid control system responds by cutting back on the "gas pedal" and not allowing too much T3 to be made, because your body cannot handle too much energy.

The adrenal medulla produces neurostimulating hormones called catecholamines, which include epinephrine (adrenaline) and norepinephrine. These hormones promote a "fight or flight" reaction that can resemble hyperthyroidism.

Hippocrates, the "father of modern medicine", said "first look to the spine" for the cause of disease. In some cases, treatable problems with the spine can reduce blood flow to the hypothalamus and pituitary gland (the paravertebral arteries provide about 30% of the total blood flow to the brain) and nerves of the autonomic nervous system that regulate the function of the thyroid, adrenal, and digestive systems as follows (note textbooks differ on the exact details of spinal levels, and there is also anatomical variation):

The primary action that these autonomic nerves have on the target organs is that they control the blood flow to the organs. This physiologic function can be disrupted by anything that puts pressure on the nerves, including edema due to local inflammation at the spinal roots, or boney impingement caused by subluxation of the spinal segments, bone spurring, degenerative disc disease, etc [Bentley1943], [Causey1949], [Gelfan1956], [Olmarker1991], [Rydevik1992], and the references in [AUKC2010]. This phenomena was also reported by Drs. Chung Ha Suh, Ph.D, Seth Sharpless, Ph.D., and Marvin Luttges, Ph.D at the Biomechanics Department of the University of Colorado in the 1980s, where they found that the rate of propagation of nerve action potentials from nerve roots was reduced by over 50% by applying a pressure of as little as 10 Torr pressure [reference pending].

Note that although the vagus nerve (cranial nerve X) does not originate from the spine, it does emerge from the skull through a foramen very close to atlas-occipital articulation, and swelling/inflammation at that joint can affect the vagus nerve, which controls almost the entire parasympathetic innervation of the internal organs.

The bottom line is that the thyroid, adrenal, and digestive system are affected by almost the entire spine.

Appropriate Chiropractic, Osteopathic, or Naturopathic spinal manipulation may resolve these problems without the use of any drugs or nutritional supplements. Dr. Robert Gear, Jr. discusses his theory and practice of spinal manipulation in his Trinity Broadcast Video and Manipulative Surgery Monograph.

Evidently, mercury selectively deactivates the deiodinase D2, and since D2 and D3 both compete for the substrate T4, D3's relative activity is increased, thus making more rT3. Furthermore, conversion of rT3 to T2 by D2 is also inhibited, which also increases the level of rT3.

Medication (prescribed, over the counter, or recreational) side effects also need to be considered, and after all other causes are ruled out, a psychological evaluation may be indicated.